Along the way to Bagan from Yangon, you cannot miss the archaeological gem that exists near the city of Pyay. Here the excavated remains of Thayekhittaya the last capital of the Pyu dynasty from 5 to 9 century AD endures as a reminder of the cityÃ¢â‚¬â„¢s magnificent past. The Pyu were the earliest inhabitants of Myanmar known to record and their seat of power was located in Thayekhittaya. As the Pyu were devout Buddhists, there are cylinderal shaped pagodas unlike its later counterparts among the remains to see. 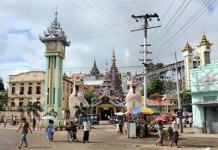