Thanlyin was a major port city in Bago Division that had fell over to various empires such as the Rakhine, Portuguese, and British. So, the city is known for its historic buildings and other remnants of its past under shifting authorities such as an oil refinery constructed by the British which is still utilized till this day. Another major attraction here is the Kyaik Hmaw Wun (Thanlyin Kyaut Tan) Pagoda, housed on an island in a river by the picturesque Kyaut Tan village. Because the entire island is a temple compound, visitors take off their shoes after arriving by boat. 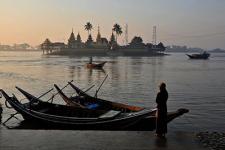